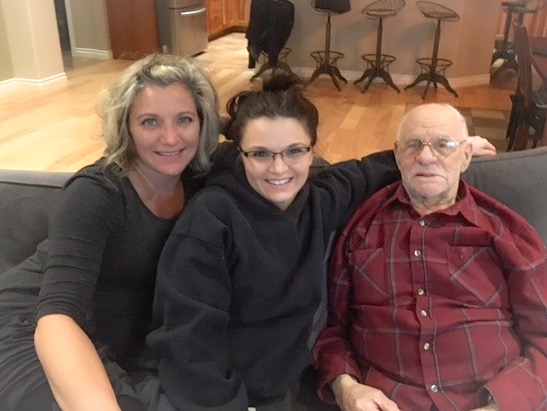 Tabetha Toloff (Koyukon Athabascan and Russian) grew up as a kid in Nikiski and has lived in Anchorage for over 30 years. Her beloved grandpa, Charles Peter Toloff, was born in 1921 in Fort Yukon, and later homesteaded in Nikiski where much of her family lived. Tabetha’s great- grandmother was Margaret Albert Reed of Rampart. Her great-grandfather was Peter Toloff and was from Russian. Grandpa Charles is now 95 years old, is like a father to Tabetha, and is the oldest living original shareholder of his Native Corporation, CIRI.

Tabetha is married and has a daughter and two step-sons. I have known Tabetha since the early 2000’s. We served on the board for the Alaska Native Professional Association (ANPA) for a number of years. Since our ANPA days, we have been busy with our lives and I was glad to catch up with her recently.

Tabetha’s passion for education led her to earn her Master of Organizational Leadership degree with a concentration in Servant Leadership from Gonzaga University; her Bachelor of Arts in Organizational Management from Alaska Pacific University (APU); and an Associate in Applied Science degree in Business from UAA. In 2014, she completed APU’s Alaska Native Executive Leadership Program. Alaska Pacific University (APU) recently highlighted Tabetha as one of their new board members and featured alum.

Tabetha credits her Grandpa Charles with teaching her a strong work ethic. He is family-oriented, does for himself and helps others. He inspired Tabetha to give back to her community and share with others. She has worked with organizations that help advance Alaska Native people, whether it is with direct services, scholarships, job creation, education, shareholder development and more.

Tabetha is a dual shareholder of Bering Straits Native Corporation and CIRI. She was grateful to receive scholarship support from The CIRI Foundation while pursuing her degrees. Like many young Alaska Native people who weren’t raised around the same traditions held by their Alaska Native elders, she didn’t grow up knowing or learning about her cultural heritage, ANCSA, or what it meant to be Alaska Native.

In her mid-20’s, Tabetha set out to give back by working for and volunteering with Alaska Native organizations as a way to learn more about her culture. She made it her mission to learn more about Alaska Native people, culture and ANCSA. Tabetha felt she wasn’t ever easily identified as being Alaska Native and many times found herself in situations or conversations where she needed to explain her heritage to others. It gave her an opportunity to learn from others and she has been fortunate to work with people who have generously shared their culture with her, and some who have given her meaningful insight and gifts of knowledge.

Tabetha has treasured the many connections she has made with people she has worked and crossed paths with, including Willie Hensley. Last year, Willie gifted Tabetha with an Inupiaq name, Ivalu. It means dried caribou tendon or sinew that is commonly used to tie canoes together, and also means useful and strong. Tabetha loves the Alaska Native value of sharing, and appreciates the Inupiaq name being shared with her.

Many young Alaska Native people grew up as Tabetha did, and she shares some advice:

Tabetha is proud of the strides made by Alaska Native tribes, organizations and companies over the years. She is happy to have contributed to organizations, like ANPA, that have grown in the past 20 or so years. I have always admired Tabetha’s work ethic, sense of humor and willingness to ask questions and learn. I also admire the ways she mentors young people in a professional and volunteer capacity. Ana basee’ Tabetha for sharing a little bit about yourself!