Huslia has a long standing tradition of holding dog races, snowshoe races and other competitions around Christmas and New Year’s Day. Here are some photos courtesy of Dolly Simon-Dayton and race results courtesy of Jo Derendoff.

PJ Simon of Allakaket is starring in one of Animal Planet’s newest reality TV shows, American River Renegades. At least six episodes will air this summer. They’ll decide whether or not they want to continue after they see how this initial run goes. PJ is the only Alaskan ‘Renegade’ on the show. There are three other ‘Renegades’ from the Lower 48. PJ and I are cousins.

The premiere episode will air on June 15 on Animal Planet. Check your local listings.

PJ hopes the show puts a positive aspect on Alaska Native people and their way of life. He says, “We don’t live in igloos. We might not drive in cars, but we get in boats, snogos and airplanes.” PJ goes on to say, “We’re trying to find food. We have to work hard for what we have.”

The cost of fuel is expensive in rural Alaska. According to PJ, they have to prioritize their time and efforts to go seining, moose hunting and caribou hunting. He wants to clarify they are not starving.

PJ has many accomplishments in his life, and has been keeping himself busy lately. PJ is the second Chief of Allakaket, and serves on the Tanana Chiefs Conference executive board, and Doyon, Limited board. He also participates on a focus group on sanitation and running water for the Department of Environmental Conservation.

PJ is a former plumber. He went from a generous salary of a plumber to making a lot less to return home to be a political advocate for this community. He is a recreational gold miner among other things. PJ is often called upon to broadcast sporting events.

PJ is passionate about giving back to his people. He grew up on the Koyukuk River and he says, “The village raised me up.” PJ serves in those leadership capacities so he can fight for a positive environment for tribal members, better education, running water and sewer, prevention of domestic violence and sexual assault, safety in the villages and for controlling alcohol and drugs. It’s a tall order, but he wants to stand up for villagers and won’t give up.

“I want to tell kids that I’m there for them. Be proud of where you grow up. Never give up.” – PJ Simon, Koyukuk Athabascan

PJ asserts a lot of people are affected by domestic violence and sexual abuse. He stresses the importance of openly talking about these issues and finding way to prevent them. PJ also says, “It’s our job as leaders to provide employment and some kind of security so they can take care of themselves.” PJ encourages young people by telling them that it is never too late to better themselves and to find gainful employment.

Villagers are connected to the land and resources. According to PJ, Alaska’s fish and game resources are exploited. He says, “Our resources are running low. Game is getting scarce, including moose, caribou and fish.” PJ is an avid hunter and fisherman and provides for his extended family in Allakaket. He advocates for conservation of fish and game.

PJ wants people to remember, “We’re strong Native people.” He’s a village advocate with a mission to lessen the disparity between the villages and urban areas. The communities do come together to survive though. PJ says, “Our bonding mechanism is working together and providing food for the villages’ health and welfare.”

In upcoming episodes of American River Renegades, you’ll see him dipnetting at Chitina and getting there by four-wheeler. 🙂 You’ll see him using a traditional fish trap to catch white fish on the Koyukuk River. You’ll also see him building a log firewood raft. They also went half way to Henshaw by boat last fall during the fall hunting season. You may also see his adventure of going out water fowl hunting by dog team. PJ is known for his great sense of humor and I’m sure that will come through on the show.

I’m looking forward to watching the episodes and seeing people of the Koyukuk River and their lifestyle featured in the show. Who knows what the future holds, but I’m glad to see PJ and others from the interior show a part of how I grew up. I’m glad young people have a positive role model like PJ to look up to. Thank you PJ for sharing the lifestyle of Koyukuk River people and for fighting to protect that way of life. 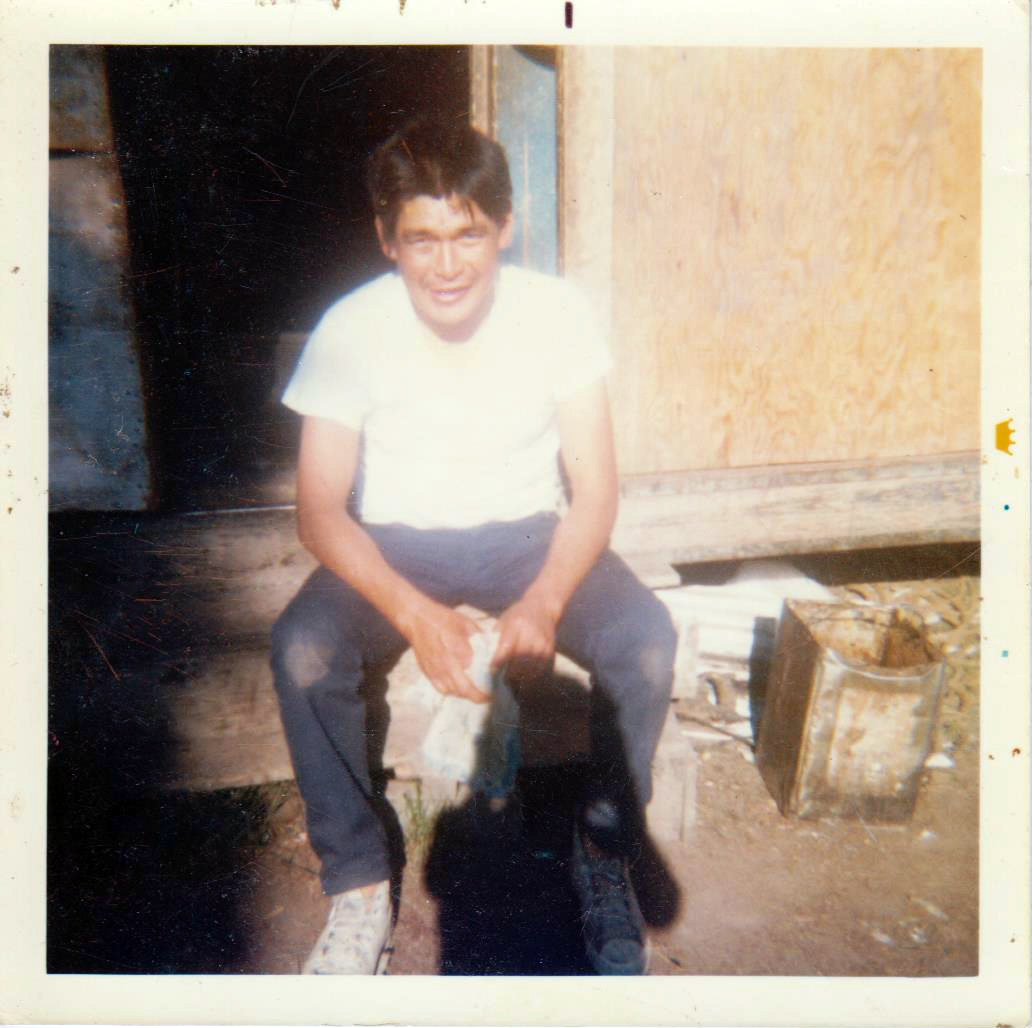 Every year, I send Christmas cards out to family and friends. I enjoy receiving cards with pictures and letters. It is a great time to catch up with people. Each year, I get a card back from Donald Bergman, an Athabascan Elder from Allakaket. Don is 75 years old. He can no longer write with his right hand after a stroke, so the sentences are a little shaky from writing with his left hand.

This year, Don sent me pictures along with his letter. It truly warms my heart to receive a wonderful letter like this from uncle Don. Don is my mom’s first cousin. Don’s late wife, Carrie Bergman, was a special lady. She was the nicest lady who always had a shy smile on her face.

Don is a trapper, hunter and fisherman. He and late Carrie lived a subsistence lifestyle. They spent a lot of time in their camp, which is about six miles below Allakaket on the Koyukuk River. When we were small kids, my parents brought us to visit them in camp. They went back and forth between camp and Allakaket by dog sled. Late Carrie was an excellent skin sewer and knew how to tan moose skin. She made rabbit skin and beaver skin mittens and caribou leggings. My mom, Eleanor Yatlin, said late Carrie was a great storyteller and told some wonderful and funny stories of living in camp.

Don’s letter was addressed to me and my husband:

You guys send me nice picture every year, so I send old pictures. One is 4th of July races. They have it down here in old airport. They pay $400-$500 for men’s and woman’s race. First place that is.

I’m doing okay. Stay alone in my old house. I sure like to get out camping and get beaver. No one trap anymore. Prices are good. I like to eat beaver meat, easy to catch.

There’s more moose again. They had wolf control last year. There was no moose for couple years. Wolf kill them all.

I hope you like these pictures. I got lots of old pictures.

Don said he doesn’t have any pictures of himself anymore and that is why he sent me some of his old pictures. The next time I see him, I’ll definitely take some pictures so he can share it with his family and friends. I loved hearing about what is happening in Allakaket.

One Athabascan tradition is to respect your elders. Elders have worked hard to raise families and teach traditions. I can’t wait to go to Allakaket and other villages along the Koyukuk River to spend time with and learn from elders. They have a lot to contribute and share. Treasure your elders wherever you may be. They appreciate the simplest gestures of kindness and being connected.

I recently visited my hometown of Huslia, Alaska. It was great to be home and visit with family and to be out in the wilderness!

Here is a slideshow of my trip:

Here are some more photos from my trip. Enjoy!

We helped to build a smokehouse for my parents, Al and Eleanor Yatlin, while we were there. They had the same smokehouse for about 20+ years. They like that larger size and the extra height.

I look forward to visiting home each year. I love interior Alaska!

My parents, Al and Eleanor Yatlin, still go to fish camp each summer. They are getting older, but still make it work. I grew up in fish camp. I love hearing stories and pictures they share about camping and fishing and about life along the Koyukuk River. They spend time at camp along with their daughter, Tanya, and granddaughter, Lydia. Other relatives and friends camp out with them periodically.

Vanessa learned to cut fish. Her son, Brandon, worked hard when they cut fish in July. Now Brandon has fish for his dogs for the coming winter. Jubilee and Joseph learn little Denaakk’e (Koyukon Athabascan language).

My brother, Johnnie, describes them as: “This is what my parents do. Old school Indians living and surviving off the land.”

“It sure is big difference from town and camp. We use candles, cook a lot over camp fire. It’s quiet. We rest when we go back down to camp. There is too much rushing when we are in town. We hear cranes, geese, ducks and loons. We are always out on the river. It is exciting to see what we catch in our fishnet! Summer sure is going by fast!” – Eleanor Yatlin

Mom and dad live on an island that cut through in the 1990s. It gets a shallower each year and there is only one place to get through right now.  She says, “I close my eyes as we cruise through the narrow opening going to our camp! That is the only way to go through there. Otherwise, we’ll get stuck there. Too much excitement!!”

The camp has a high cut bank. My brother, Al Jr., measured it a few years ago. He estimated the bank to be about three stories high. My parents still climb it today. They have to carry fish, water and supplies up and down the bank. I hope to be as strong as them when I’m their age.

Mom makes jam and jelly out of berries she picks each year. She says, “I am glad we picked blue berries yesterday. It’s raining today. There are cranberries in the area too. You can see them all over. Anaa si baabe. We picked high-bush berries, made jam, picked some more and froze it.”

We have fun, rain or shine. She counts the fish from a recent trip, two silvers and two sheefish.

My dad has a trail cam, and sets it up at various places along the Koyukuk River. Here is a picture of a bear that he recently captured on the camera.

When they go to camp, they set the fish net. They look around along the drift wood for good poles to hang fish on. They also look for logs for their smokehouse. They work hard and enjoy camp life, whether it is warm or cooler. It is starting to get darker as the days get shorter. It is also getting a little cooler at night. My parents have a comfortable tent, and use a small stove to keep warm.

I’m proud of them for living maintaining a subsistence lifestyle and for raising their children camp. They are living ‘the life’!