I was elated when President Obama announced Mount McKinley will be restored to its original Koyukon Athabascan name of Denali. It’s about time. It was an emotional day for many indigenous Alaskans. It felt like Alaska Natives were given back something taken away from us. People may think colonization is just something that you read about in text books. It is a very real thing when you see names like Mount McKinley take over our place names. People from all over the world travel to Alaska to see the nation’s highest peak. Now, they will see a place where the very President himself thought it was important enough to recognize and honor Athabascan people.

It was awesome to see Poldine Carlo, who is Koyukon Athabascan, sing the Denali song up on his arrival in Anchorage, Alaska. Check out the Indianz.com story about Poldine Carlo:  94-year-old Alaska Native elder greets Obama with Denali song. I can just imagine the excitement she felt and her tears brought tears to my eyes. Sylvia Lange was with her at the time and shared a few photos.

Sylvia says, “My wonderful companion, Poldine. While waiting for the President to arrive, she conquered all hearts by singing the Denali song in Athabascan.” To say that Poldine is happy is an understatement.

Thank you to Salon.com for the shout out to the Athabascan Woman Blog. Read Paula Young Lee’s story at:  The truth about right-wing Denali outrage: Destroying the tenacious colonialist “right” to re-name is long overdue.

Here are some comments on the Athabascan Woman Blog from earlier this year on their thoughts about changing the name.

I asked my Facebook friends what they thought about the name being restored. Here is what they  had to say:

“Always been Denali to me!” – Larry Kairaiuak, Yup’ik

“Yes, I always called it Denali too, never should have been renamed in the first place.” – Violet Huntington, Athabascan

“My Deenaalee [daughter] just announced the wonderfully exciting news that Obama is giving our amazing and breath-taking tallest peak its rightful name officially – Denali! That is the best news. Welcome to AK President Obama and Xusrigidisdhin’- a grateful thank you!!! For Deenaalee she is seeing her namesake finally honored, as we all are!” – Malinda Chase, Athabascan

“It was always meant to be Denali.” – Kylee Beatus, Koyukon Athabascan

“Incredible viewed from the sky; spectacular from the ground; the Creator’s paintbrush on the landscape to give us a constant reminder of his power and grace.” – Beckie Gehrke Murdock

“I saw the announcement on my phone while at the grocery store and almost cried. I can’t believe this is finally happening. Wonderful!!!” – Clare Stockert Ross

“I’m so glad to see this. So much silliness about it though – makes me laugh. Denali is such a beautiful word in and of itself – like a gasp of wonder.” – Amy Modig

“It’s always been Denali to me. I told my husband the news and he said it’s always been Denali and it’s being restored to its original name, should never have been Mt. McKinley! It was a proud day for me. Went to work and several of my coworkers mentioned the renaming of Denali but they were able to say that it was an Athabascan word…because they knew that I AM ATHABASCAN! ” – Brenda Mahan, Athabascan

“I think it is a good idea. A congressman from Ohio opposed it and then he said what can we do to remember this president. Besides naming Denali after him.” – Al Yatlin, Jr., Koyukon Athabascan

“YES!! DENALI IS SUCH A WONDERFUL NAME FOR THE HIGHEST MT.!! EXCITING!!” – Selina Sam, Koyukon Athabascan

Thank you to my friends for sharing. Thank you to President Obama and Secretary Jewel for restoring Denali’s original name! 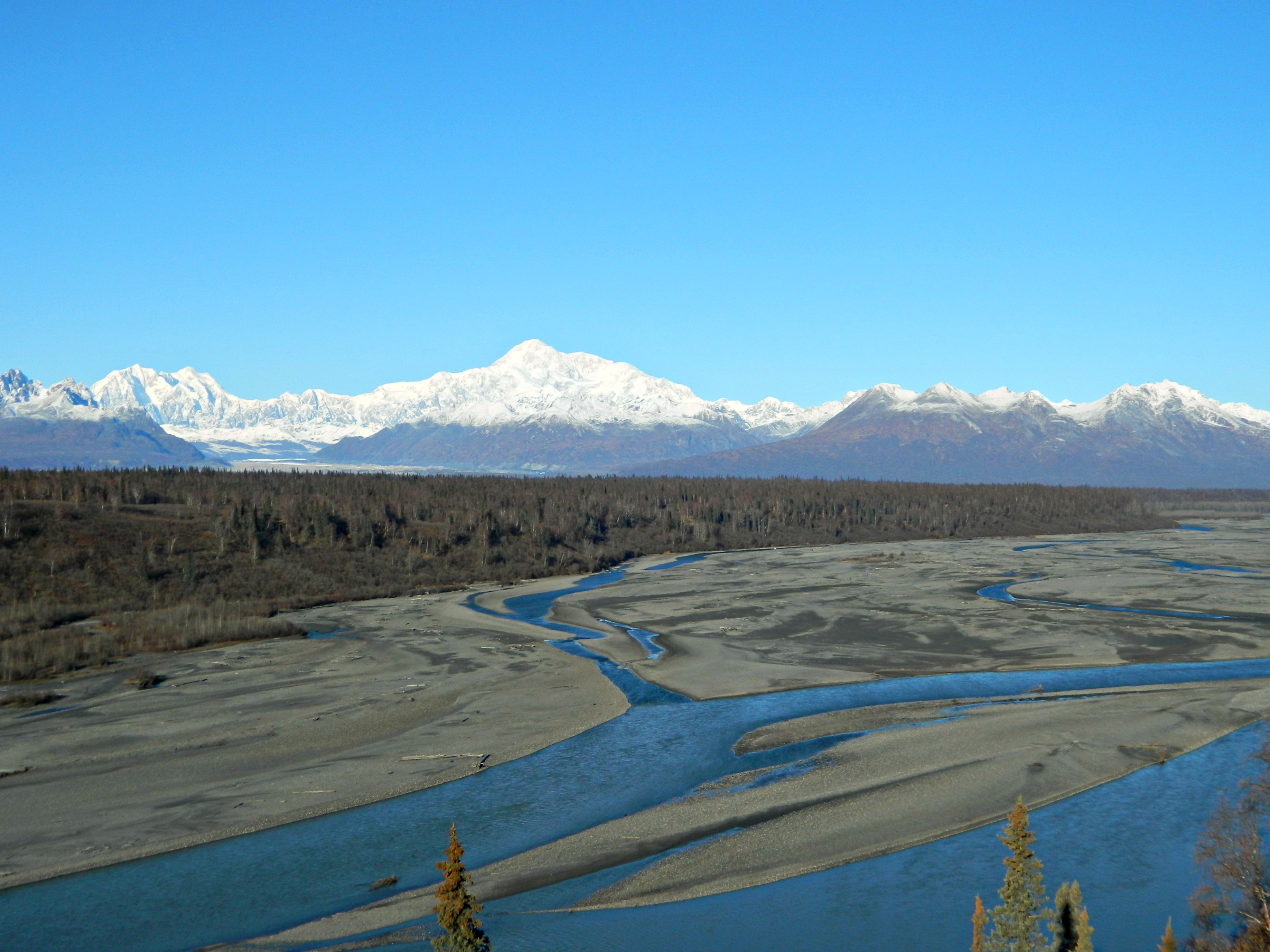 Do you think Mt. McKinley should be officially renamed Denali? If so, why?

“I once heard before we are suppose to call things by their right name. That everything has a name, we can take time to learn them or not.” -Leslie Jones

“Denali, because that was the original name. It also sounds more “Alaskan”.” –Sharon Carey

“I have always called it by its original name~Denali so It should be made official.” -Marlene Adams

“Its an Alaskan internal affair, not Lower 48 issue.” – Will Yaska

“Yes. Place names should reflect the indigenous cultures and languages inherent to the area.” – Julie Biddle

“As a symbolic gesture, given the right audience and speaker(s), it could be a means to support a greater cause. Also, Denali is just a cool name!” – Richard Perry

“Yes!! In my mind Denali doesn’t have to be ‘renamed’ as its official name IS and has always been Denali. But in order to decolonize the name we have to go through the Western government channels to ‘rename’ it as they say. And the next mountain name we have to decolonize is ‘Mt. Edgecumbe’ in Sitka.” -Vivian Faith Prescott

“It sounds better and more Alaskan too! And know of a pretty lil’ girl named, Denalee!” – Gina McCarty

“Denali should remain that. That’s the real name. The people who came and changed every name didn’t know each place had a name.  The people who wrote about Alaska said it was ‘vast wastelands.’ It wasn’t because people were already living here and everything had a name. Every hill, knoll, river bends, slough had a native name according to where they lived and what language they spoke. They thought they were the first people here. It’s very interesting if you the time and read Alaska Native names on a map.” -Velma Schafer

“Denali was the original name. When outsiders first came to Alaska they renamed lots of people. They all had their native name and missionaries and miners rename them. I even heard of them giving people names of states, like Kentucky, Missouri, etc. Another story I heard was there were two brothers who were at different places when the along the Koyukuk River and they were given different last names.” – Dorothy Yatlin

“There are more pressing issues than to rename Deenaalee the tall one – n no it’s not the great one. Ask any elder in Hughes they all will say so. Murkowski and Sullivan have to work towards more important stuffs. This makes us all look like idiots. Ohio should worry about Ohio quit telling the Last Frontier what to do.” -Margaret I. Williams

“My told me story about Denali. It was how a medicine man escape up Denali. when he got to the top it was so cold he peed on himself to keep warm, but he ended up freezing up there. There was a conflict and the one escaped to the top. Yes, It would be a blessing to ‘Get the name back to Denali’.” -Rhoda Stertzer

“Yes the name. Should be Denali. That was the name from the beginning of time.” – Anna Frank

“There is a word for everything on earth and beyond in Dinjii zhuh ginjik.” (Native people language) – Darlene Reena Herbert

“It should never have been changed to McKinley. It’s name is Denali.” -Nathan Shafer

“Denali was the mountain’s first name. Renaming Denali with the name “Mount McKinley” is a form of cultural imperialism (see https://www.nytimes.com/books/first/l/loewen-lies.html). It’s somewhat akin to what happened with Native people when non-native people decided they wanted to stay, and in order to stay, they had to dissolve the connection that Native people had with their culture and their land. Non-native people gave Native people new names that had nothing to do with who they were. Denali had a name already, and that fact should be recognized, but even better, it should be honored.” -Jennifer Aposuk McCarty

“It’s respectful to the people of the land in which it lies.” – Eva Sheldon

“In Nikolai we call it Denazii similar to the koyukon could understand the lingo a little bit!!! Koyukon that is.” -Daniel Esai

“It’s been called that longer than anything else by people from Alaska. And it sounds better than saying “McKinley” too.” – Lynn Lovegreen

“Yes Denali!! It would be nice if people would pronounce it right though.” -Gabriel Vent

“This mountain reminds me of the original people that was here for many, many years ago. We all cannot go back in our minds even about 1,000 years but our ancestors were here. Back then they all spoke their language and I’m sure they had a name for it. Denali represents THE GREAT ONE. It sounds like what they would say.” – Joe Frank

“That was the original name. Denali. That means huge I think. I thought they did make Denali official.” – Catherine Williams

“Denali is its original name. So odd that Ohio congressmen have the power to force on that mountain the name of an Ohio-born president who never visited our state.” -Tracy Kalytiak

Thank you to my friends who shared their opinions. Join in the conversation and add your opinion in the comment.

What do Alaskans do when they have spring fever? Get outside to enjoy the many outdoor activities. They also go ‘outside’, which is often referred to as the ‘Lower 48’. Many Alaskans plan a trip to warm beaches in Mexico, Central America or Hawaii.

This year, my kids and I headed north along the Parks Highway to Fairbanks during spring break. The weather was wonderful, sunny and clear for the whole week. One of the things that drew me up there is to visit family and friends. Fairbanks is the hub city for the interior.

I wanted to see the wonderful ice sculptures that I’ve been hearing about for a few years. Ice Alaska held the World Ice Art Championships in Fairbanks. It seemed like there were hundreds of ice scrulptures. There was even an amateur section. I posted some pictures in the slideshow below, but you had to be there to really see how it was. There was a huge kids section with ice slides and more. There was something new and exciting to discover at every turn. They had fireworks in the evening. They also released lanterns in the air. It was magical!

We spent a divine evening at the Chena Hot Springs Resort, which is about 50 miles outside of Fairbanks. We had a great soak and swim. The outside pools were great. It is weird to be able to touch snow and be in the hot springs at the same time. Your hair freezes and the steam is rising around you. My kids learned how to swim in the warm pool inside! That was very exciting for them. We all left with a great relaxed feeling.

The Festival of Native Arts was also happening that weekend. We enjoyed Alaska Native singing and dancing. I enjoyed listening and watching the dancers share their culture.

The high school regional basketball tournament was also happening that weekend for smaller interior schools. That weekend, the Jimmy Huntington School (of Huslia) boys high school team won the regionals and later went on to compete in the State tournament. We missed the games, but got to see the award ceremony. It was great to see many of my relatives in one place after not seeing them in a long time.

No, it wasn’t a warm, sandy beach, but it was fantastic! Fairbanks has a lot to offer, even in the winter. All together, it just turned out to be a great vacation.