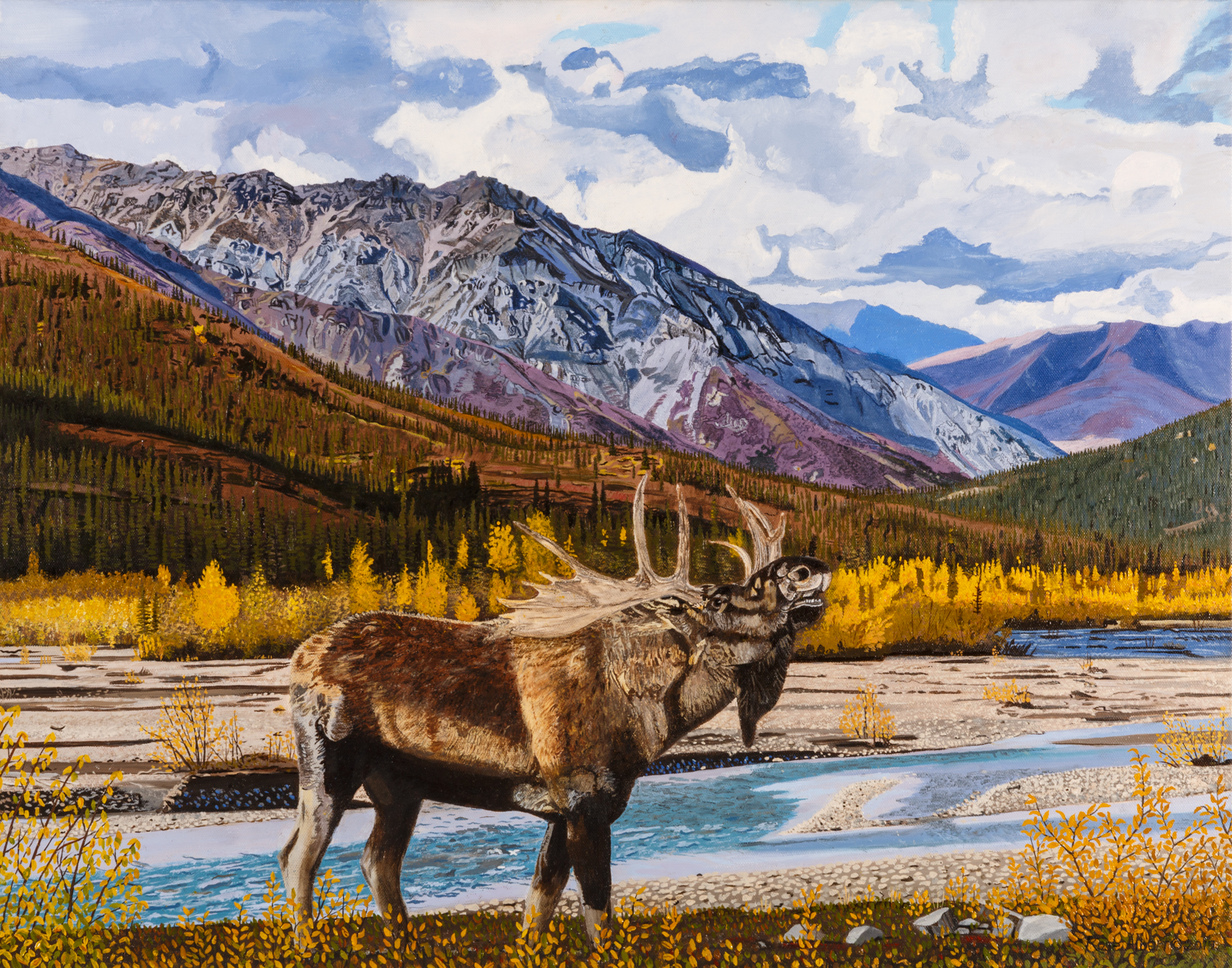 I have admired Rose Albert’s painting for years. Rose is Koyukon Athabascan originally from Ruby, Alaska. She is a talented artist and also a former Iditarod sled dog musher. She is owner of Nowitna River Studios and resides in Anchorage.

Rose always wanted to become an artist since she was two years old. She remembers playing under the blankets with my siblings and being fascinated by static electricity. The streaks of light looked like little angels to her and her siblings. At the age of five, Rose’s first three drawings were of angels with wings.

Another vivid memory is when Rose was mesmerized by midnight blue glass beads shining at an old dump site. The color blue spoke to her and in second grade, she drew rivers, streams and mountains and colored them blue. Rose says, “After school as dusk fell upon us, I would stand one place outside and watch as the atmosphere turned blue.” She remembers getting cold outside but couldn’t resist watching how the blue faded into darkness. Rose realized later, she was a winter person.

“I went through grade sixth to eighth drawing women in the latest fashions. I gave them away and my classmates seemed to like them. My first oil painting was of Adam and Eve in the garden of Eden. Later in eighth grade I did an oil painting of Zeus who was the sky and thunder God in ancient Greek religion as a class project. The next one and many afterwards were of wild life. One of a bull moose and cow and one with wolves running. Throughout high school, I painted outdoor winter scenes and wildlife and best of all dogs racing down the trail, all along trying to capture that blue atmosphere that cold weather seems to bring on. During high school I took art classes by Don Decker. Though I may have been good at composition, he instructed me on how to work with light and the direction it was coming from and when to use shadows and colors.” – Rose Albert, Koyukon Athabascan

Rose worked on the Trans-Alaska Pipeline System after high school. She painted on her free time on commission from pipeline workers from the Lower 48 who were missing loved ones. Using small snapshots of their wives, she painted 16×20 oil paintings. After that job ended, she was lost afterwards until a school teacher from Ruby told her I should go down to the Institute of American Indian Arts (IAIA) in Santa Fe, New Mexico. In 1981, Rose earned an associate’s degree in two-dimensional art specializing in painting from IAIA. She says, “I still obsessed about blue and brought to life Alaska themes with rich northern colors in cold but romantic settings on the Iditarod race or trapline.”

After Rose returned to Alaska, she got in the Iditarod race and finished in 32nd place. She was the first Alaska Native woman to get into the Iditarod. She says, “It was cold and blue out there and I loved it.” Rose continues to refine her painting techniques depicting wildlife and beautiful Alaska scenes, and loves painting Iditarod scenes. She also specializes in painting portraits.

In 1998, Rose began building Alaska Yellow Cedar boxes and carving wildlife, totemic art and Iditarod images of people and their dogs in the Iditarod. One of her favorite things to do is to design boxes to the appropriate shape or size. Then she pays a woodworker to build finger joint boxes so they will never lose their shape. At one point, Rose had to hire someone to build them because it took too much of her time to build them.

Rose has always loved beads. Ten years ago, she began making costume jewelry, especially with glass beads. The jewelry was a hit, and Rose began adding Swarovski crystals, stone, ceramic, bone and silver beads. Later, she worked with moose antlers by inlaying beautiful natural stones in the antler after slicing them into oval or round buttons. She searched for the best bone or stone beads to go with her pendants. Rose loves all Alaskan stones, like jasper, Malachite, quartz and garnets, but she also likes Labradorite.

Like many Alaska Native artists, Rose is multi-talented and is not afraid to experiment with new art forms. She is also an inspiration for women who want to run in the Iditarod. Follow Rose Albert on the Nowitna River Studios Facebook page or email her at lbrt_rs@yahoo.com. Rose shared a photo of her most recent painting, entitled “Moose Calling along the Dietrich River” on her Facebook page. It took four about four months to paint in five phases. This oil painting depicts a bull moose calling as it walks along the Dietrich river on a brisk autumn day during the rut.