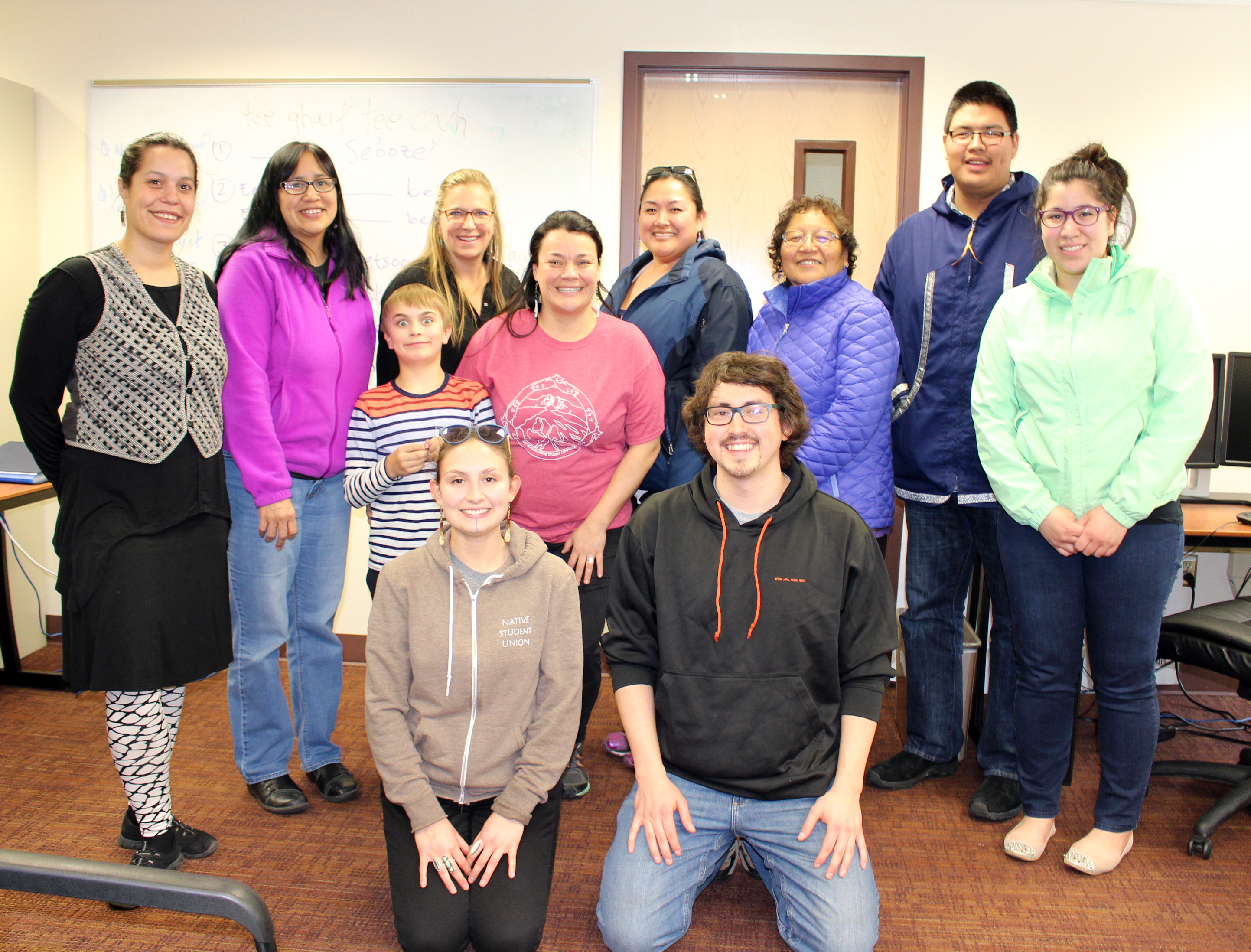 I am learning my language, Denaakk’e (Koyukon Athabascan), by attending classes this spring. There were some workshops held in Anchorage, and one in Fairbanks. The Alaska Native Studies Conference held four language workshops as pre-conference sessions. Dewey Kk’ołeyo Hoffman and Lorraine David were instructors at the Denaakk’e workshop. Kk’ołeyo and Lorraine taught us a basic Denaakk’e introduction.

There are many ways to do an introduction in Denaakk’e, but it was great to get a basic one to practice. I need to work on pronunciation. When Alaska Native people introduce themselves, they share who their parents and grandparents are and where they are from. We also share our siblings, spouse and children (if any). It is a great process to go through just to put it on paper. I have been writing down Denaakk’e names of my family members. I have also been talking with my family about how to say words/names and it has sparked a renewed sense of my identity.

Dewey Kk’ołeyo Hoffman has been leading a Denaakk’e class in Anchorage for the past month. There three more days of ‘class’ on April 22 at 10 a.m.-2 p.m. and April 29-30 at 9:30 a.m.-4:00 p.m. It is a co-class with Denaakk’e and Dinjii Zhuh K’yaa (Gwich’in). Rochelle Adams is leading the Dinjii Zhuh K’yaa class. We start together, go to separate instruction, then come back together at the end.

It has been fun to hang out with other participants and to learn together. It is a safe place to learn and okay to make mistakes as we are learning and practicing. There are people of all ages who attend. It’s fun getting to know people.

It has been a fluid process too where people have come when their schedule allowed. Kk’ołeyo says, “So far, we have practiced introductions, weather terms, animals, some demonstratives, and some commands.” They are all lessons you can learn anytime. Kk’ołeyo brings resources like videos, dictionaries, storybooks, and workbooks to the class. We reference the dictionary when needed. We have also learned a few songs where we learn words, like body parts and weather. At the Fairbanks training, we sang the airplane song.

One challenge to bringing teaching the Denaakk’e language is the number of dialects. I would say we are mostly learning the Central Koyukon Athabascan dialect. We learn from each other.

“I feel more motivated and disciplined to make learning my language a priority for me and for my kids. Taking this class has helped move me from apathy and inaction into action!” – Helena Hoffman (Koyukon Athabascan)

Thank you to organizations, like the Alaska Native Heritage Center and University of Alaska (UAF) College of Rural & Community Development for offering opportunities to learn Alaska Native languages. There are some great language revitalization efforts going on around the state. While I was at the Alaska Native Studies Conference, I heard about some great efforts for Denaakk’e and Dinjii Zhuh K’yaa languages. The Fairbanks Native Association is working to create a Denaakk’e immersion school for young children. A group of Gwich’in people have created a Dinjii Zhuh K’yaa language nest. They have been meeting on their own for the past two years.

It is a process to learn your language. I have taken Denaakk’e classes before and carry those lessons forward, and will continue to learn more. Learning the language and songs brings me closer to my family, friends and ancestors. I always get warm fuzzies when Alaska Native people speak in their languages and always feel empowered. It must make our ancestors dance for us to learn our language.

****
There is still time to attend the language workshops in Anchorage. The workshops are free. There will be on April 22 at 10 a.m.-2 p.m. and April 29-30 at 9:30 a.m.-4:00 p.m. The April 22 class will be held at the Alaska Native Heritage Center’s Athabascan Ceremonial House. The workshops on April 29 and 30 will be held at a location yet to be determined. For more information, contact Shyanne Beatty at 907-330-8071 or sbeatty@alaskanative.net.