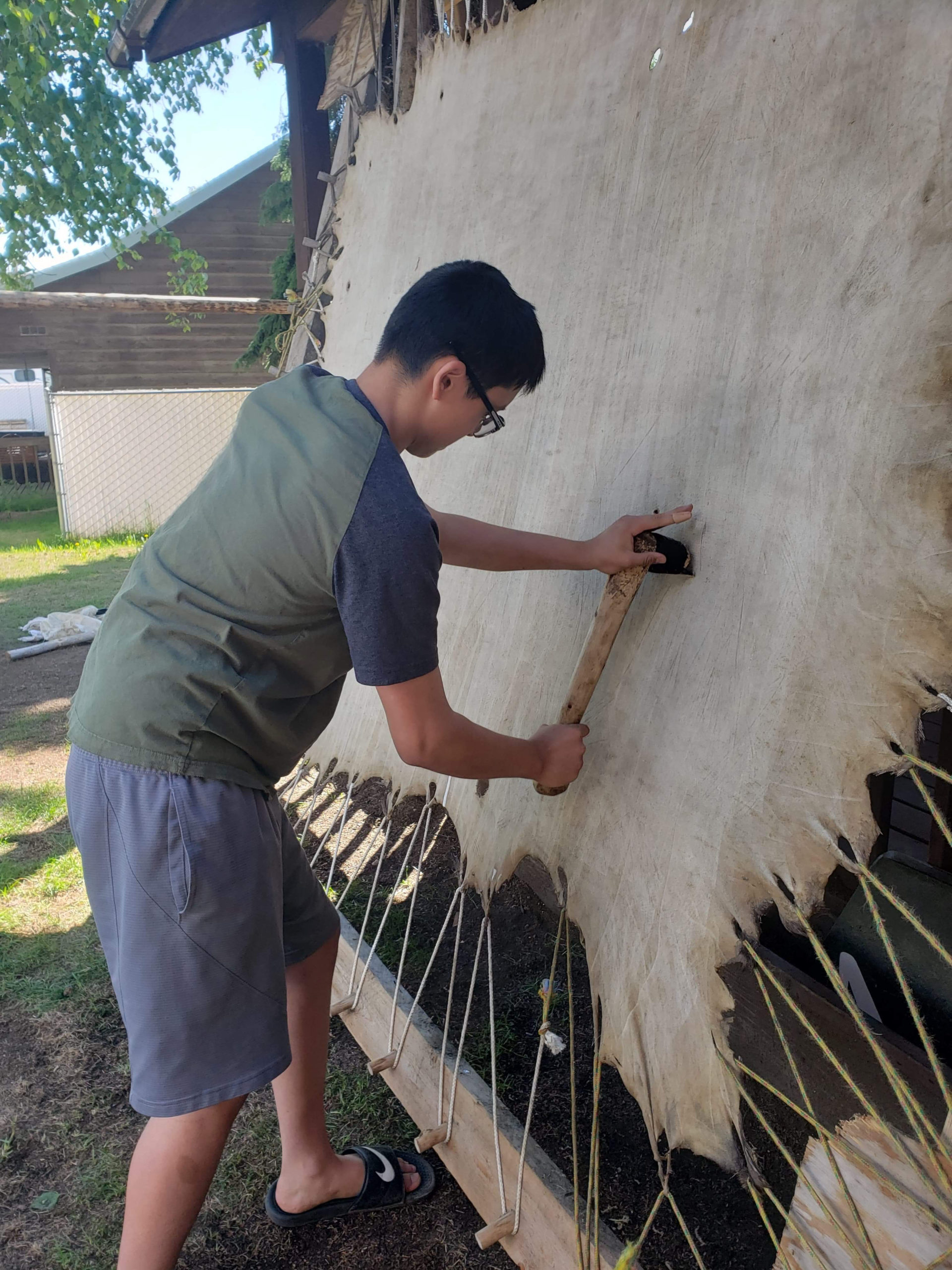 During a recent event in my hometown of Huslia, I got a chance to chat with my relative Tom Daton Huntington. Daton was his maternal grandfather’s name. They only had Denaakk’e in that time. Like me, he is originally from the Koyukuk River country. Tom was born at camp below the mouth of the Hogatza river and grew up at Huslia and Galena. He lives in Fairbanks and works in the petroleum industry – instrumentation technician of all things automated and process control. His hobbies include cooking, small engine repair, wood working, and hide and fur tanning.

In our conversation, Tom talked about tanning moose skins and shared some photos and videos of the process. It was very interesting learning a little bit about his process and he graciously agreed to share it on the Athabascan Woman blog! He shared his written story below. END_OF_DOCUMENT_TOKEN_TO_BE_REPLACED

I did it. Since late 2016, I beaded 100 pairs of hard bottom slippers/moccasins. It has been a great learning experience, healing, connection to culture, and more. I’ve written about it a few times, but wanted to mark this occasion with a few lessons I’ve learned along the way and some interesting places it has led me to.

Here are some slippers I’ve made:
https://www.instagram.com/reel/CHlG4gmDL2c/

It’s rewarding to work on beadwork, giving them to people and to teach people how to bead/sew. I love giving the slippers and teaching others. It almost feels better giving rather than receiving. I’m sharing a gift learned from my grandma, mom and aunties.

Since I’ve had the Athabascan Woman Blog, people have asked me how to start a blog. I want to share some tips about how to get started and other ways to share your story.

Expressing yourself and publishing your creative work has never been easier, thanks to the blog. Blogging can be an avenue for advocacy to speak out on important issues in your community. Some sample blogging platforms include Wordress, Blogger, Tumblr and Weebly. Most are user friendly.

I share my stories, interviews with Indigenous people, photography, ‘how to’ bead videos and tips, and more. But I’ve seen blogs dedicated to photography, vlogging and podcasting. Find out the medium that interests you and try it. Ask people for advice. END_OF_DOCUMENT_TOKEN_TO_BE_REPLACED

I shared a picture of a young Gwich’in woman, Quannah Potts, on the Athabascan Woman Blog Facebook page. Quannah Potts says, “This year, I was blessed with shooting my first caribou and our future generations should have the same privilege of being able to hunt and live their ways of life.”

Someone said, “Although using rifles and snowmobiles, ATVs and the like is hardly ‘traditional’…..”

I responded by thanking him for his comment… It brings to light one of the reason I write and share on my blog. The act of spending time on the land and providing for her family is traditional. The tradition of giving parts of the caribou from first catches to Elders or other families is traditional. Alaska Native would not have survived 10,000+ years if we were not adaptable. We moved around on the land with the seasons and the availability of plants, animals, currents, cycles and conditions. We were not static people living in one certain way. I would not expect people to be driving around by horse and buggy from a century+ ago. The only people who can critique Quannah on whether or not she is traditional is her mother, grandparents and community Elders.

When we give our first catch to Elders or other family members despite shooting with a rifle – that’s traditional.

When we sometimes sing and dance despite it being with a fiddle – that’s traditional.

When we celebrate a memorial potlatch despite it being in a school gym vs. a community hall – that’s traditional.

When we pick berries despite using an ATV or boat – that’s traditional.

When my family fishes despite using a commercial fish net vs. a fish trap – that’s traditional.

When I bead slipper tops on smoked moose skin despite being on hard bottom moccasins – that’s traditional.

When I use beads in my beadwork introduced in the past couple of centuries despite it not being quills – that’s traditional.

When I learn and share the Denaakk’e language despite being on a paper book, by video or audio recording – that’s traditional.

When I share stories despite it being on a blog vs. oratory – that’s traditional.

What would you add? We need to continue sharing our perspectives, stories, culture, language and ways of life. Enaa baasee’.

It’s finally here! A groundbreaking PBS Kids cartoon, Molly of Denali, premiered across the country on July 15. I have been looking forward to the show since I heard about it a couple years ago. Producers, animators, storytellers and funders teamed up with Alaska Native writers and cultural advisors to make Molly come to life.

With the support of her family and friends, Vera Starbard hosted a Molly of Denali Premiere Party in Anchorage. It was great to hear some insights on episodes she and others wrote. From what I’ve heard from friends and colleagues who have worked on the show, much thought has gone into every single detail of the show. It was great to hear kids and adults singing along to the catchy theme song! Vera asked trivia questions for adults and children. It was a fun way to celebrate the huge accomplishment of the show’s debut.

At a time when representation matters more than ever, it was great to hear words in the three cultures represented by Molly (Dena’ina Athabascan/Gwich’in/Koyukon Athabascan) in languages of Dena’ina, Dinjii Zhuh K’yaa and Denaakk’e. With repetition, kids across the nation will learn words in these Alaska Native languages. I also love listening to Molly’s voice, because I kept thinking she sounds like my relatives. I also loved seeing the mannerisms and sayings by the characters in the show, like when Aunt Midge said ‘real good’ just like our Elders.

It is awesome people of color are represented. One of the reasons I do the Athabascan Woman Blog is to change the narrative by sharing stories and perspectives of Athabascan and Alaska Native people. The writers, creators and producers of Molly of Denali are truly changing the narrative at the very beginning by reaching kids. If my friends and relatives are any indication, the show is reaching kids, adults and Elders. I love all of the details, like multiple family pictures on the walls and the beadwork on the characters’ clothing.

“My kids just watched the blueberry episode. My son Skyler said, ‘It’s cool they made a show about Natives.’ My daughter Skarlett and her friend Ava were singing along with the theme song. All three of them went to pick blueberries down the road from my house. They went 3X today. Also my son, Keenan, who’s 3 years old said he likes Molly and asked to watch Molly again. Thank goodness I recorded the series, so he can re-watch it.” – Rona Vent (Koyukon Athabascan) of Huslia and Fairbanks

“My son is so excited and has been counting the days down daily. He’s so excited that it’s about Alaska.” – Dena Sam (Iñupiaq/Koyukon Athabascan) of Alatna and Fairbanks

Episodes are packed with educational lessons reaching the hearts and minds of people. I watched a couple short episodes and it touched me to the core. I could probably go on all day about the things I love about every aspect of the show, but I want to share perspectives from my friends and relatives. Molly also vlogs during her show – super cute!

“Molly of Denali aired today on PBS!!!! A huge shout of thanks and appreciation to those of you who made this possible. Princess, you rock!!! Thanks for bringing this to AK and assembling the team you did.” – Sonta Hamilton Roach (Deg Hit’an Athabascan) of Shageluk April Henry of Fairbanks shared:
“A few months ago, we saw that Peter Pan had been brought out of the Disney vault. We popped some popcorn and bought it and sat down with our kids, eager to share with them a cartoon from our childhood. The movie had barely begun when John Darling reminded the other children, ‘Indians are cunning, but not intelligent.’

Our three-year-old Kai sat between us, eyes glued to the screen. My heart sank. My husband and I looked at each other and steadied ourselves for the tears we knew would erupt when we shut it off. But we knew that much bigger than the tears shed over a cartoon promised and taken away is the pain Indigenous children grow up with and carry into adulthood when they internalize the racism so prominent in depictions of Indigenous people in media. Kai saw children who fly, and a land where kids stay young forever, and fairy dust, and a very clear message – you are not intelligent. You are less than.

So when Kai first saw the preview for Molly of Denali, he said, ‘Hey! I think I know her. I think I’m in there!’ And he was really very excited. But I was moved to tears with gratitude. As an activist in these trying times, the victories are few and far between. But progress of this kind means so much.

In the opening scenes…they were going to a tribal hall, and told us that the grandpa had a necklace ‘like dad’s’. But shortly after that, he simply fell into this quintessential American experience that has been a staple to the majority and fully inaccessible to indigenous children until now – he watched a cartoon he could relate to.” An episode called, Grandpa’s Drum, tackles our boarding school story. I watched it three times already and cried each time. It’s a story of triumph, speaks to honoring our cultures and traditions, and a healing song is shared. When little is taught about boarding school history in the US, I’m glad it touches on the story in a positive way. I loved the song! When you watch the episodes, they also weave in real people and stories sharing singing, dancing, life in Alaska and making aqutaq, and more. Check out a part of the episode below.

After seeing the amazing response to Grandpa’s Drum, Producer Princess Daazhraii Johnson (Neets’aii Gwich’in) shared a little bit more about working with Elder Reverend Luke Titus of Minto. “We came to Luke for his approval – that’s when we took this photo together. Dewey also teaches often in the Denaakk’e immersion classroom so that’s why he’s dressed in uniform ?. Love to our language warriors! What goodness we are capable of when we work together & hold each other up. All this guided by our Ancestors,” says Princess Daazhraii Johnson. “Oh man how amazing it is to see them identify with a cartoon show!!! They knew the grandpa song thanks to teacher Dewey. This is huge. They love it! So thankful this is now available to them.” – Kimberly Nicholas (Koyukon Athabascan) of Kaltag and Fairbanks “We just watched two episodes, and tears fell. Our babies will never know a time without representation of their beautiful culture shown so lovingly on TV. So much love to our amazing fam working so hard for years to make this day a reality: Princess Daazhraii Johnson, Dewey Kk’ołeyo Hoffman, Vera Starbard, Du Aaní Kawdinook Xh’unei, Rochelle Adams and everyone else involved. Quyanaqpak from this thankful mama and future ancestor.

I wish everyone would watch this, especially our elders and parents/aunties/uncles generation. I watched Grandpa’s Drum twice today and cried both times. Healing is happening through our storytelling in real time ❤ I love #MollyofDenali.” – Ayyu Qassataq (Iñupiaq) of Uŋalaqłiq/Unalakleet and Anchorage

I’m impressed with the excellent writing, production, animation, storytelling, education, singing, partnerships, actors, and so much more! Kudus to Princess Daazhraii Johnson (Neets’aii Gwich’in) and to all of the contributors to this show. I’m a #MollyofDenali fan. Enaa baasee’, Mahsi’ choo and Chin’an for this healthy dose of truth, racial healing and transformation.

The Anchorage Museum at Rasmuson Center has an exhibit dedicated to Molly of Denali. Check it out if you have a chance!